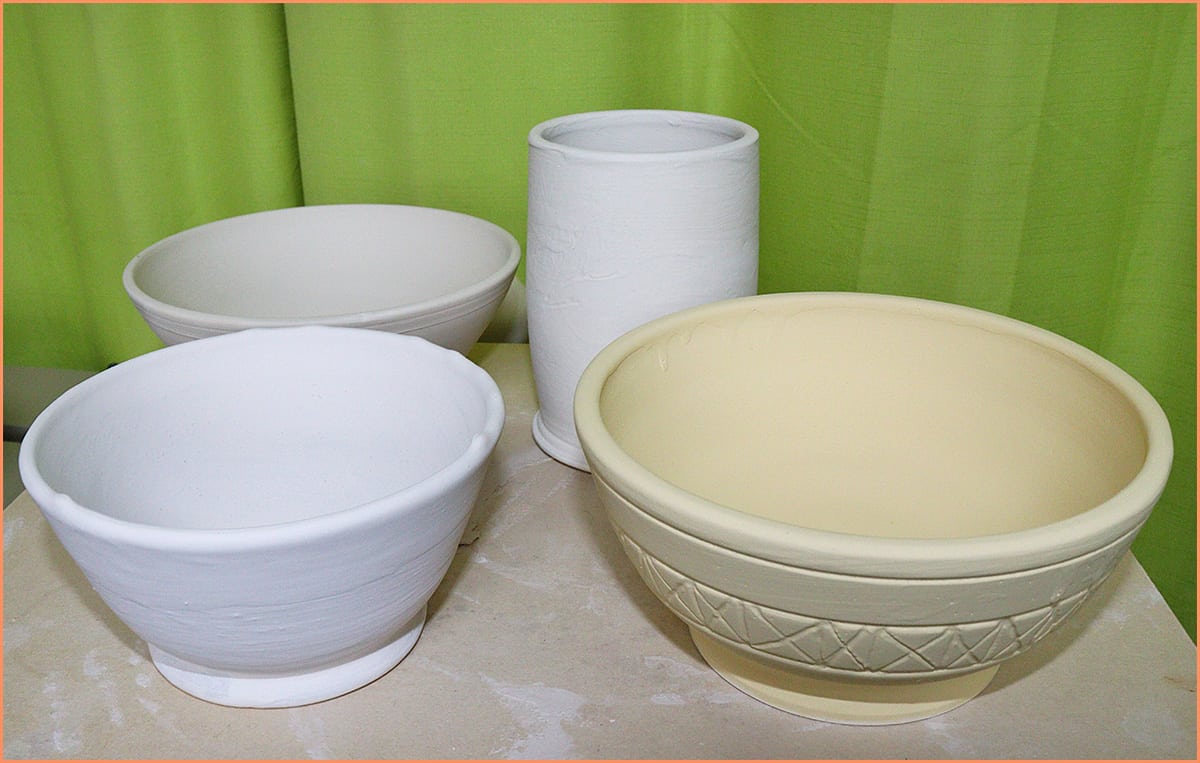 Once your Clay is molded and bone dry, it’s time to fire it in the kiln. However, some new Potters may ask about the importance of bisque firing, as it’s not uncommon for seasoned Potters to skip the first firing and apply a glaze onto the bone dry greenware, streamlining the firing process into one cohesive action. This is known as Single firing. But can you bisque and glaze fire at the same time?

You can Bisque and Glaze fire at the same time, but it isn’t recommended for beginners. Bisque firing is required to increase your pottery’s durability, making it more stable for the following glaze and fire. It takes experience and care in choosing materials and techniques to combine the two.

This guide will cover Bisque firing, Glaze firing, and you’ll learn about the benefits and disadvantages of Single firing. How to find a process that works for you, what it takes to do so effectively, and whether you want to implement it in your ceramic process. Let’s get started.

Why You Should Bisque Fire Pottery First

Firing in pottery is when you heat the clay in a kiln to turn it into ceramic material, and there are many different types of Ceramics, based on the clay used for the process. But do you have to bisque fire first?

Bisque firing is intended to prepare the ceramic for glazing so it’s easier to glaze and the glaze also absorbs into the pores of the bisqueware. This is also an important process in pottery because many commercial glazes are made for bisqueware.

Electric, gas, wood firing, and Raku are all popular methods for firing ceramics. Though, most potters use an Electric Kiln for firing because they’re more accessible. That being said, it’s possible to bisque and glaze fire (single fire) in any type of kiln. Let’s take a closer look at bisque and glaze firing to better understand why they’re typically done separately.

What Is Bisque Firing?

This process is when the clay is transformed from a fragile, material to a porous sturdy ceramic. It involves taking greenware (the fragile unfired piece of pottery) and heating it in a kiln to become a ceramic material.

A Bisque (or biscuit) is the name for the fired but unglazed version of the pottery. It’s more durable than greenware (which is simply molded and air-dried clay) considered an unfinished piece.

It’s important to note the temperature used for bisque firing is typically Cone 06 -1828 degrees Fahrenheit (998 Celsius)  to Cone 04 – 1945 degrees Fahrenheit (1063 Celsius). Any higher and the pores in the ceramic will start to close. During that increase in temperature, moisture and organic materials leave the clay so it can become a hard, durable ceramic.

What Is Glaze Firing?

This process is used to bond the glaze applied to ceramics. Glaze refers to the blend of water and minerals applied over a ceramic that gives it a smooth, glossy, satin, or matte finish. In addition to its beauty, it also strengthens the final product.

Potters use Glaze in various colors and textures to create intricate patterns, vibrant hues, and unique works of art. In most cases, the glaze is applied onto the surface after a pot is bisque fired.

After decorating your ceramic with matte, satin, or glossy glaze, it’s placed in the kiln and again slowly brought to the right temperature. The length of time it takes to glaze fire depends on the kiln and cones size used, which may be over a day.

Glaze firing not only secures color and decoration but can also waterproof the pot. Once glaze fired, a piece of pottery will be considered finished.

Can You Skip Bisque Firing?

You can skip bisque firing and head straight to glaze firing, but it’s not always advisable. To skip bisque firing, you need to undertake other procedures to ensure that your pottery makes it out of the kiln alive and without any, cracks, crazing, crawling, bubbles, or pinholes.

This process known as single firing has some advantages and disadvantages for the health of your pottery.

The term single firing refers to the combination of bisque and glazing into one firing cycle. Many ceramists practice single firing with mixed results. In essence, single firing eliminates the need for bisque firing. To use a single fire process, you’ll need to work on raw glazing or glazing your greenware.

Part of what makes single firing difficult is that glazing before any firing process doesn’t allow impurities and gases to come to the surface beforehand. With that said, there’s a risk of failure in the kiln.

Single firing isn’t as popular as dual firing with bisque and glazes for a few reasons. The main issue is that a single firing can be hard to master and can even lead to a destroyed piece. It comes down to what will happen in the kiln with the glaze on the raw clay piece.

Here are the disadvantages of single firing:

You can save electricity cost and wear & tear on your Kiln. You also have less dust in your studio if you sand bisque fired clay.

How To Single Fire Pottery Effectively

Other than precision, patience, and practice, there are a few ways to enhance your single firing process.

Depending on your kiln programming choice, (implementing a slow preheating cycle) single firing is an option that can create beautiful works of art.

Your choice of clay, glaze, and glaze application will significantly influence the quality of your final work. Because many commercial glazes are made for bisqueware applications, it is better to make your own glazes. That’s another reason why seasoned potters have a higher success rate.

Your glaze application can affect the ease of the firing process. Some artists recommend spraying as the best application process for single firing. Spray Glazing allows more water to evaporate from the glaze before hitting the pot, removing additional moisture.

Underglazing Pottery is a Different Glazing Process to Consider

Underglazing occurs when a transparent glaze is applied on top of colors made with clay and frit to create a permanent design. It offers the artist a way to enhance the look of colors and decorations as desired. In some cases, Underglazing can benefit from single firing.

You can apply underglaze to greenware or bisque ceramics, so it’s an easy way to streamline the glazing and firing process.

Underglazing and applying a transparent coat of glaze on greenware does save time and resources but is still recommended only for more advanced potters. It requires a certain skill level, but anyone can implement single firing with the correct glaze recipe, instruction, and patience.

Can You Bisque Greenware and Glaze Fire Pottery in the Same Kiln?

One other question Potters have is whether you can have pots at different stages in one kiln. For example, if you have a set of pots in the greenware stage that still needs a bisque fire and another group that’s been decorated and is ready for the glaze fire.

In those cases, it’s possible to fire both sets simultaneously, but it’s not recommended. During bisque firing, pieces can touch without damaging the final piece. However, with glaze firing, you need to space the pots far enough apart to avoid touching.

You can bisque greenware and glaze fire pots in the same kiln because the two processes have a similar schedule. However, you must choose clay and glaze that work with the same heat level as your bisque pots. This means you can only glaze fire and bisque fire with low fire Clays and Glazes – Cone 06 – 1828 degrees Fahrenheit (998 Celsius) to Cone 04 – 1945 degrees (Fahrenheit (1063 Celsius). Because you cannot bisque fire to cone 5. Additionally, make sure you place the greenware pots on the lower shelf and space glazed pots accordingly.

Many seasoned Potters wonder about changing their firing process, having learned about pottery over the years.

Still, no matter the experience level of the potter, firing is notoriously temperamental. And though combining the bisque and glaze firing processes can simplify the cycle, it comes with its own set of challenges.

If you have the time and energy to experiment with single firing, you might find a practice that works for your art.

For more information on kilns, check out How To Use a Pottery Kiln at Home – 13 Tips To Remember 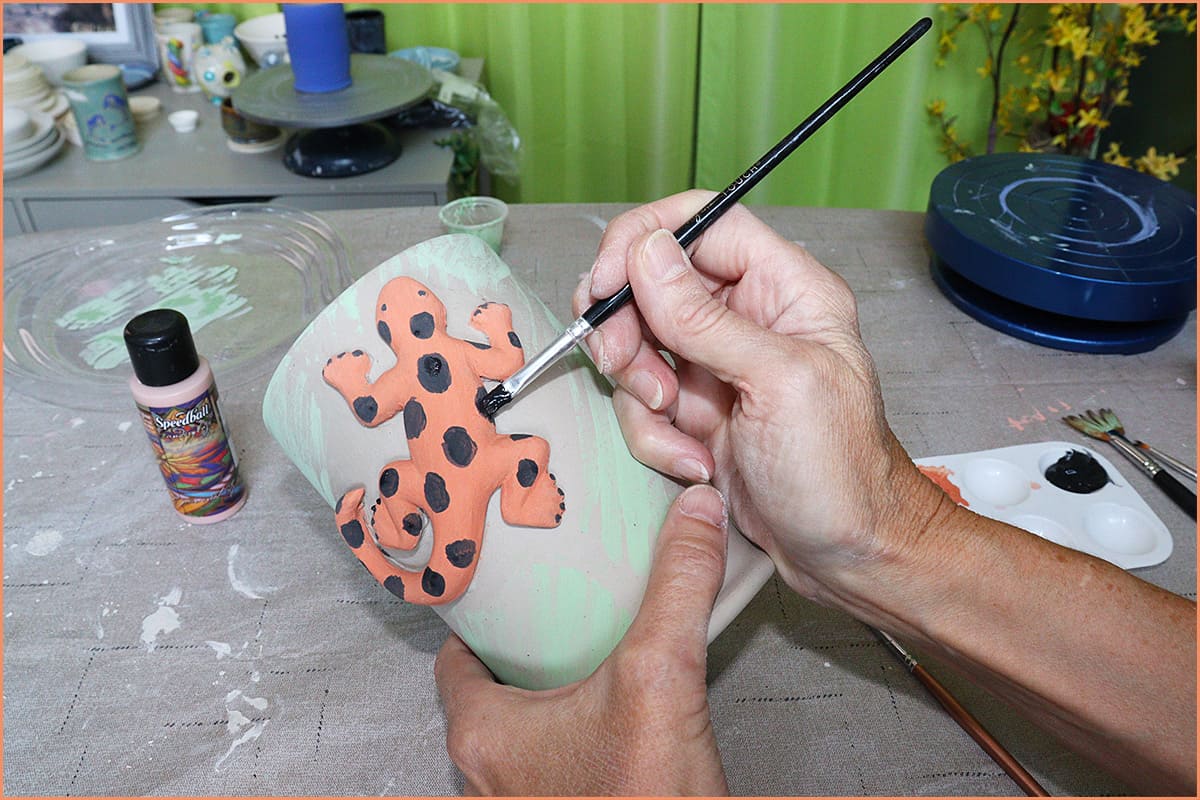 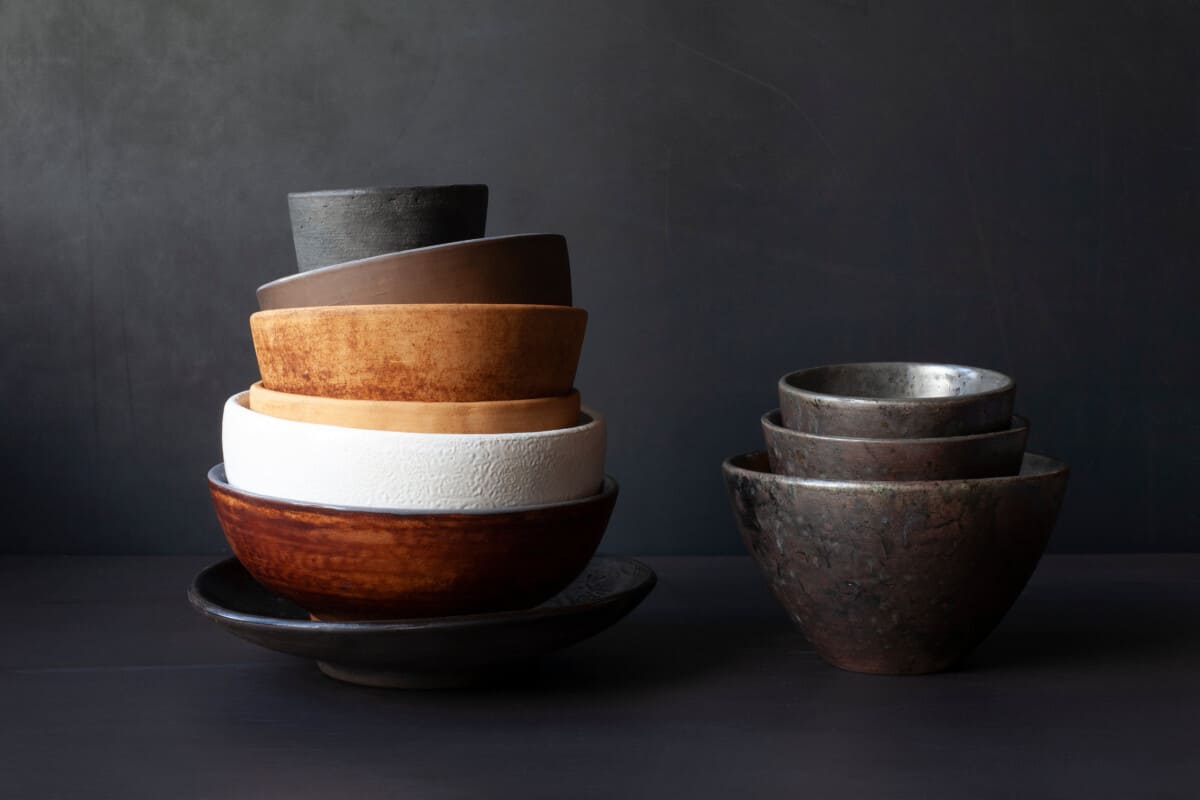 Pottery has been used by humans for thousands of years. Archaeological evidence suggests humans were using ceramics for cooking and transporting water as long as 20,000 years ago! With such a rich history of use, Is Pottery Food Safe without Glaze to use, serve, and… 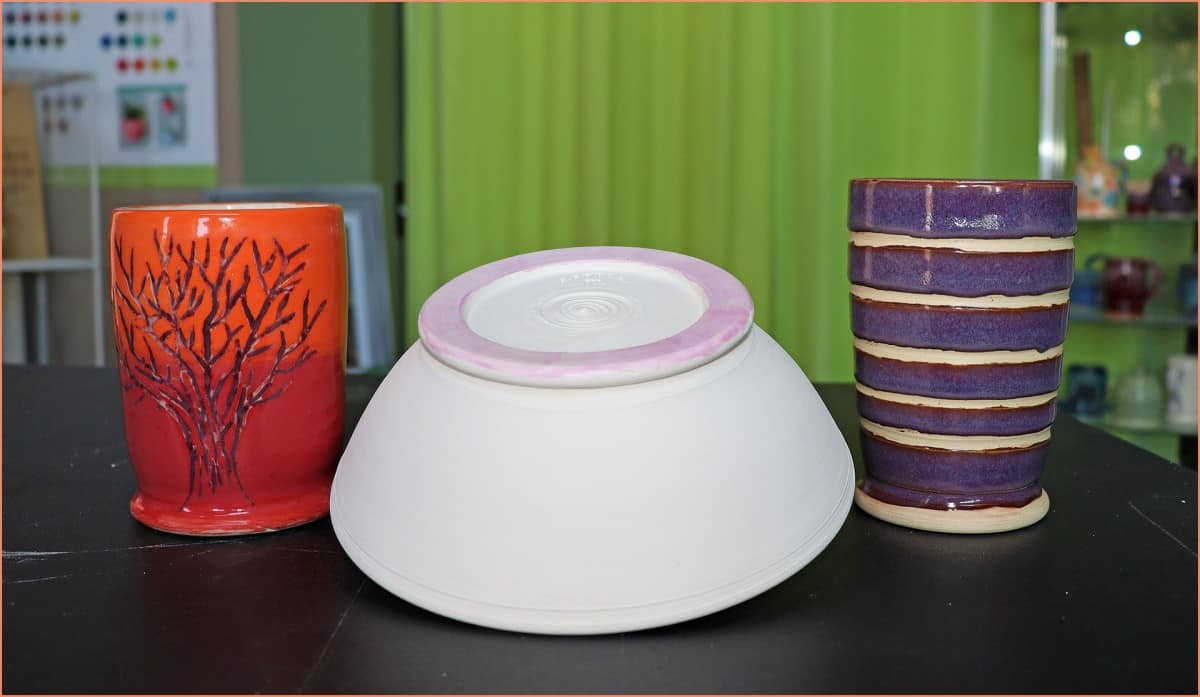 Pottery is an undeniably enjoyable but also challenging process. If you’re a beginner in this art form, there are a lot of fun techniques that unfold as you learn the craft. And along the way, one of the things that are bound to be recommended… 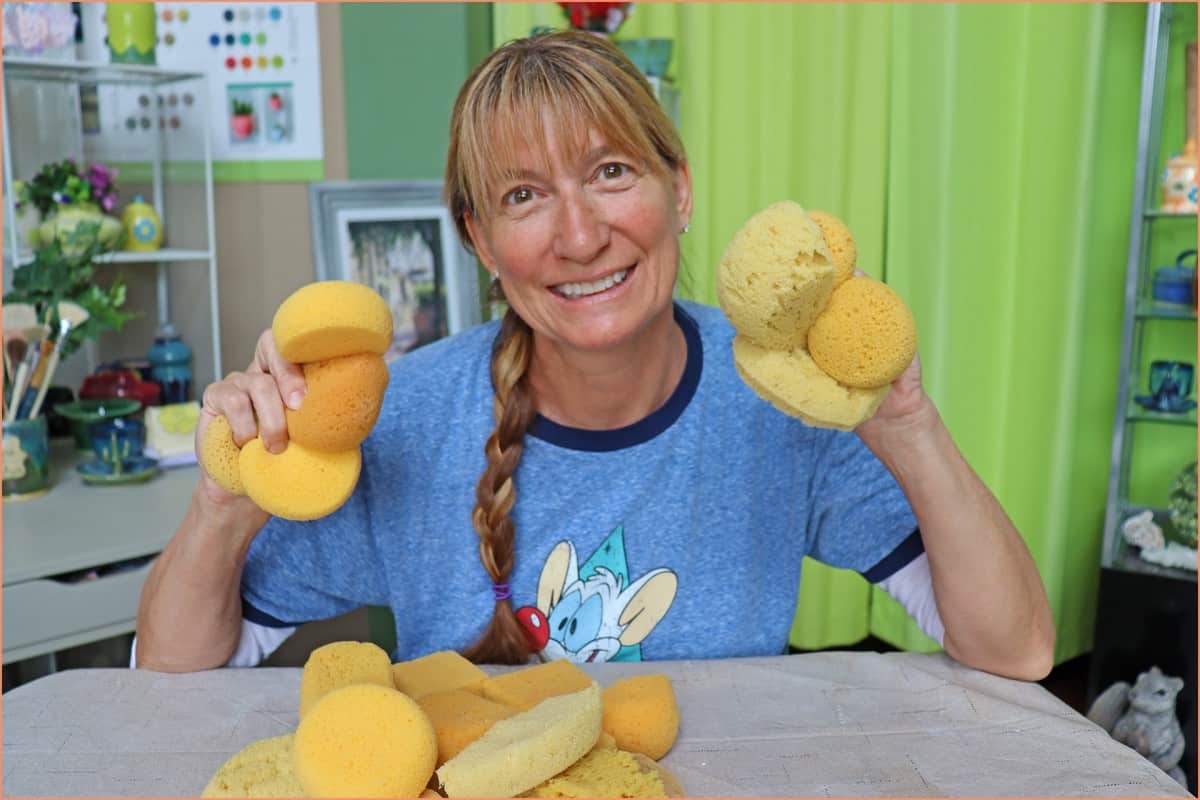 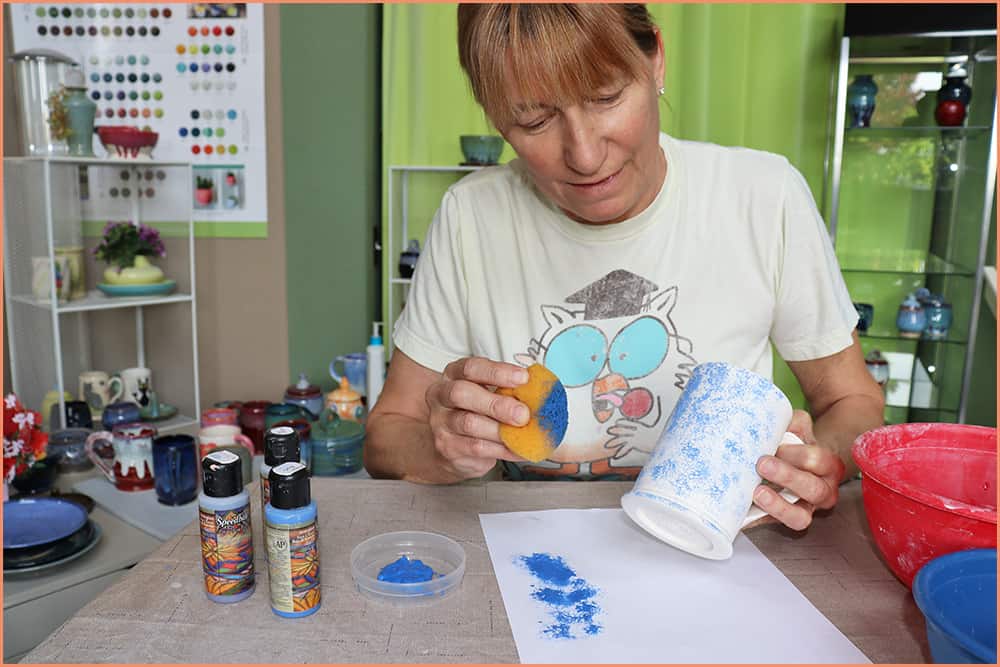 Sponges are one of the essential tools in pottery. You can use it in almost every step, from centering pieces to glazing. Ceramics that you finished with sponge glazing is popular amongst Potters because it gives them the flexibility to create unique patterns and multilayer… 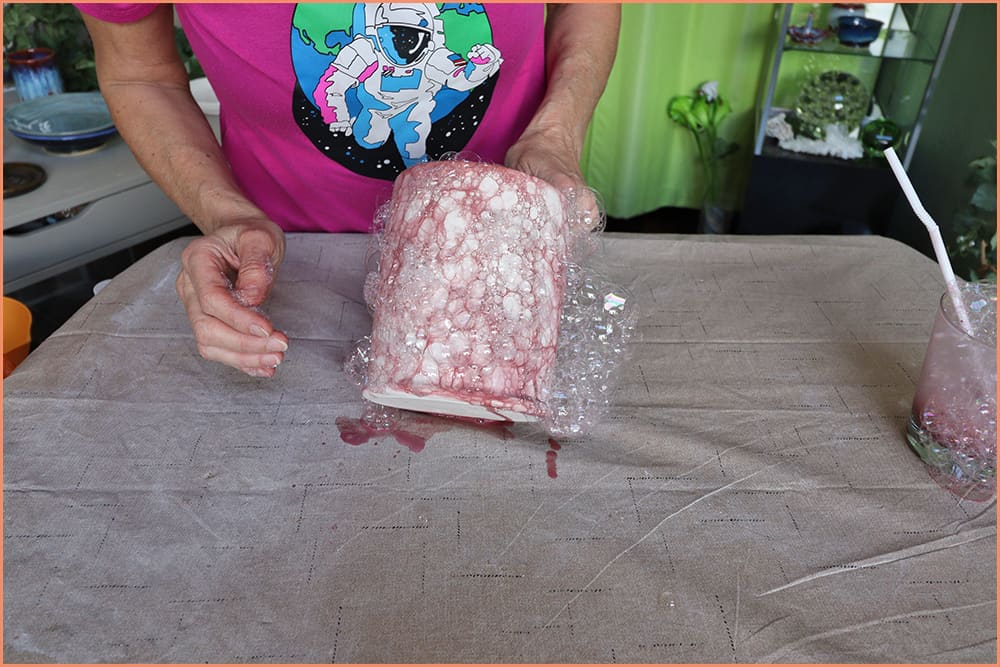 Pottery has always been the best medium to express creativity, and potters will always look for innovative ways on how they can improve their craft. And one of the glazing methods that has resurfaced and gained a lot of traction recently is bubble glazing. It…