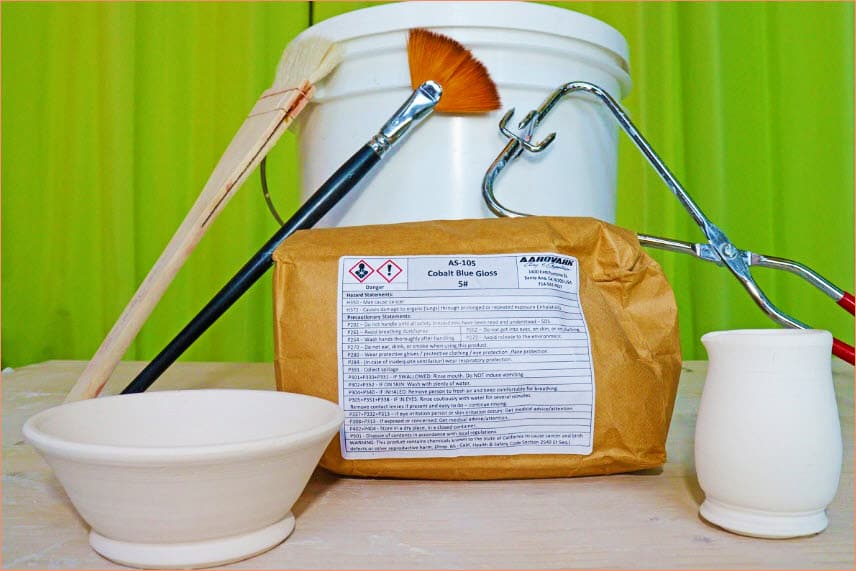 Glazing is the best way to add shininess and color to a pottery piece. There’s a large variety of techniques to glaze pottery, the most common of these being brushing and dipping. Both of these methods require their own tools and materials.

Taking a closer look at the differences between the two glazes will help you understand and decide if you want to use dipping glazes for brushing. Let’s learn about some of these key differences while answering popular questions related to this topic.

What Is the Difference Between Brushing and Dipping Glazes

Commercially produced brush-on glazes contain additives such as Veegum or Arabic gum. These help the glaze stabilize and stick better to the bristles of your brush and layer on top of pottery. They also contain added preservatives if the gum is organic, making them last longer.

Whereas brushing, you apply at least two, generally three coats of glaze. Otherwise, a brushed texture will show.

Since brush-on glazes are thicker, they can leave a texture or streakiness mainly because of the bristles. This is the nature of the method and not your fault.

Dipping glazes are thinner, and you’re not brushing, so they don’t leave a texture after being coated multiple times.

Brush-on glazes are formulated to stick to brushes and are mainly used with them. Brush-on glazes have many more uses than dipping glazes. Dipping will mainly give you a single, base layer of solid color.

Brushing can give you a base layer, patterns, and textures depending on the style of application and the number of layers. Brush-on glazes can be used for dipping, with a sponge, sprayed on, poured on, and so on.

Should I Glaze My Pottery by Brushing or Dipping?

There is no particular answer to this very common query. Some people find brushing glazes easier, while others find dipping easier.

You would think that beginners mainly start with dipping first as it’s a relatively simple process. All you have to do is pour your glaze into a large bucket and sink the object inside it for 4-5 seconds using tongs. Let the piece dry, and you have a nice coat. You can go in several times. Dipping is done mainly when you need a solid coat with a single color.

Beginners actually start more often with brushing. Even if it seems a bit more advanced. It is still easier than trailing or spraying. Brushing is great for creating designs and applying the glaze over clay.

You can also add a base coat with brushing. Even though there are more trials and errors involved in this method as compared to dipping it’s still popular with many potters.

In short, dipping is recommended when you want an even glaze coat all around the pottery piece and brushing when you want to create texture, patterns, and cool designs.

These are cool glazes. They contain speckled glaze colors, having tiny crystals that move and melt during the firing process to give outstanding results. This Mayco Jungle Gems Crystal Glaze can be fired all the way to cone 5. The higher you fire, the more it runs.

To be safe, keep crystals away from the bottom edge. This set is non-toxic and free from lead, but it isn’t dinnerware safe. It’s easy to apply and can be used by beginners.

This is a great glaze. It floats over your pottery and floats down the rim of your pottery also. Goes on very easily and leaves a shimmery finish. You can use this glaze on top of other glazes to give your pottery a unique look.

This Spectrum Floating Glaze can also be applied over plain pottery to enhance the clay color. They are non-toxic and safe for dinnerware. The glazes are best used on bisque-fired clay.

These glazes are fired at mid-range (Cone 5-6). I fire them to cone 5 with great results. They are also non-toxic and safe for dinnerware. These AMACO Potters Choice glazes are best used on bisque-fired clay.

Here are some glazes for you to check out at Top Glazes that you would like.

You can not brush glaze without some good brushes. You can also check out my Top picks for glaze brushes.

Can You Convert a Dipping Glaze Into Brushing Glaze?

You can convert commercially produced dipping glaze into a brushing glaze, but you’ll have to make an additive solution. The main reason behind it is that you can not simply add gum or Suspendaid to a dipping glaze.

Glazes used for brushing consist of 1-1.5% gum. To achieve this proportion, you’ll first have to get rid of 20% water. Otherwise, the glaze slurry would end up with too much water content. Starting from scratch or buying a new pack of brush-on glaze are much better options that value your time and money.

There are dipping Glazes That do contain the same ingredients that give the dipping glazes the same stability as brush glazes like Coyote glaze.

How to Make Brushing Glaze Additive

You can add it to dipping glazes too. Add varying quantities of this mix and test fire different pieces because each brand has a different formula.

In this article, we learned the difference between a brushing glaze and a dipping glaze. Yes, you can use dipping glazes for brushing with a few small adjustments.

Since dipping glazes are already thin, you can’t make them thicker by simply adding gum or reducing them. Thickness is needed; otherwise, the glaze won’t properly brush on.

With that said, now that you know the differences and what you can and can not do with brushing on dipping glazes, have fun glazing your beautiful Pottery. 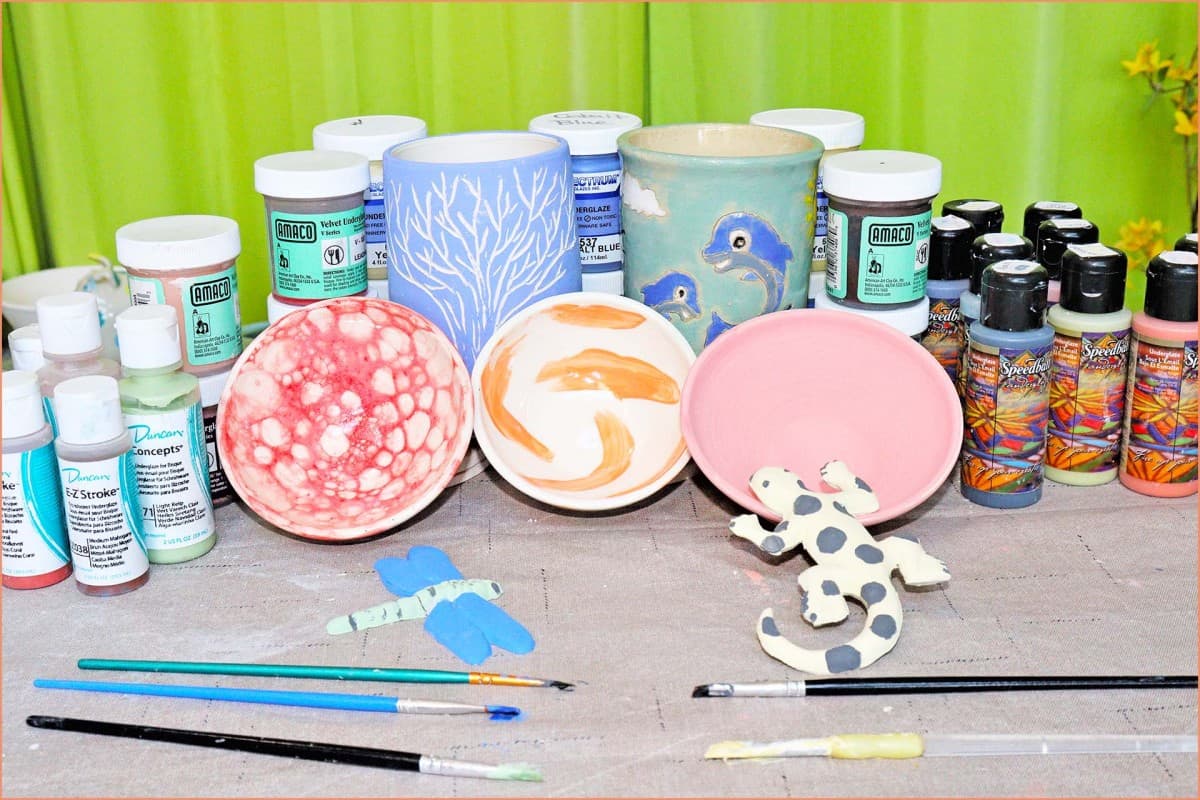 Underglazes are an exciting medium to work with. Most polished potters know how to use underglaze to give color to their pieces and create masterful designs. However, using underglazes can be challenging and sometimes confusing for beginners. So, how do you use an underglaze? You… 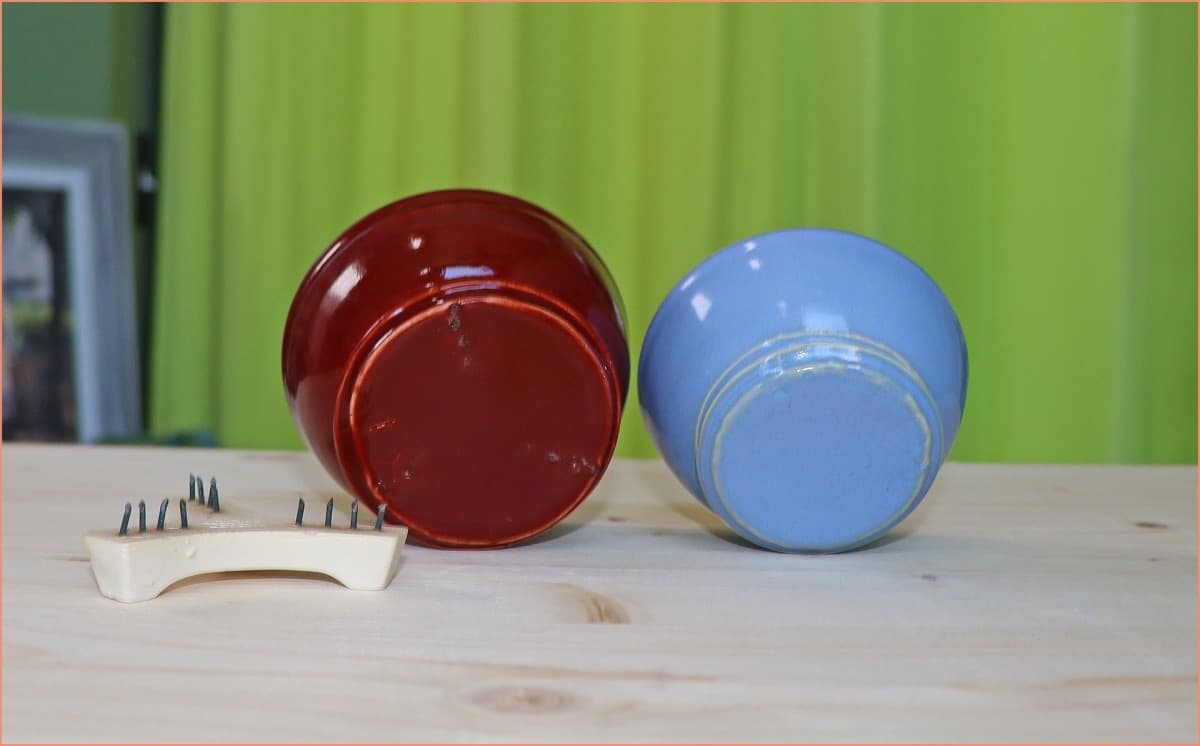 Glazing pottery is a great way to protect them from water or wear and tear. It involves adding a layer of glaze to the surface of your pottery and then fusing them by placing the pottery in a high-temperature kiln. But the bottom of pottery… 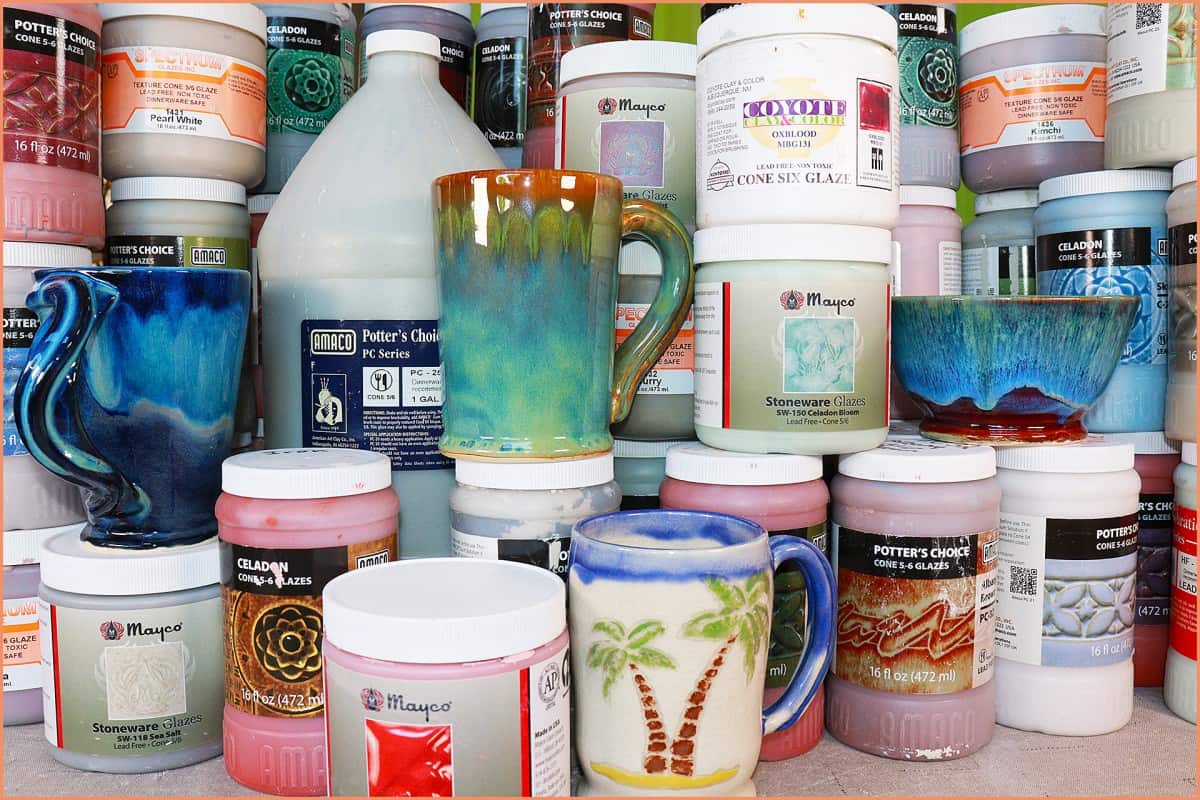 Have you ever seen small or large thin cracks in your pottery glaze and wondered how they got there? Well, these cracks are called Crazing, and they are a sign that your glaze is not expanding and contracting with your clay. Crazing Is a Network… 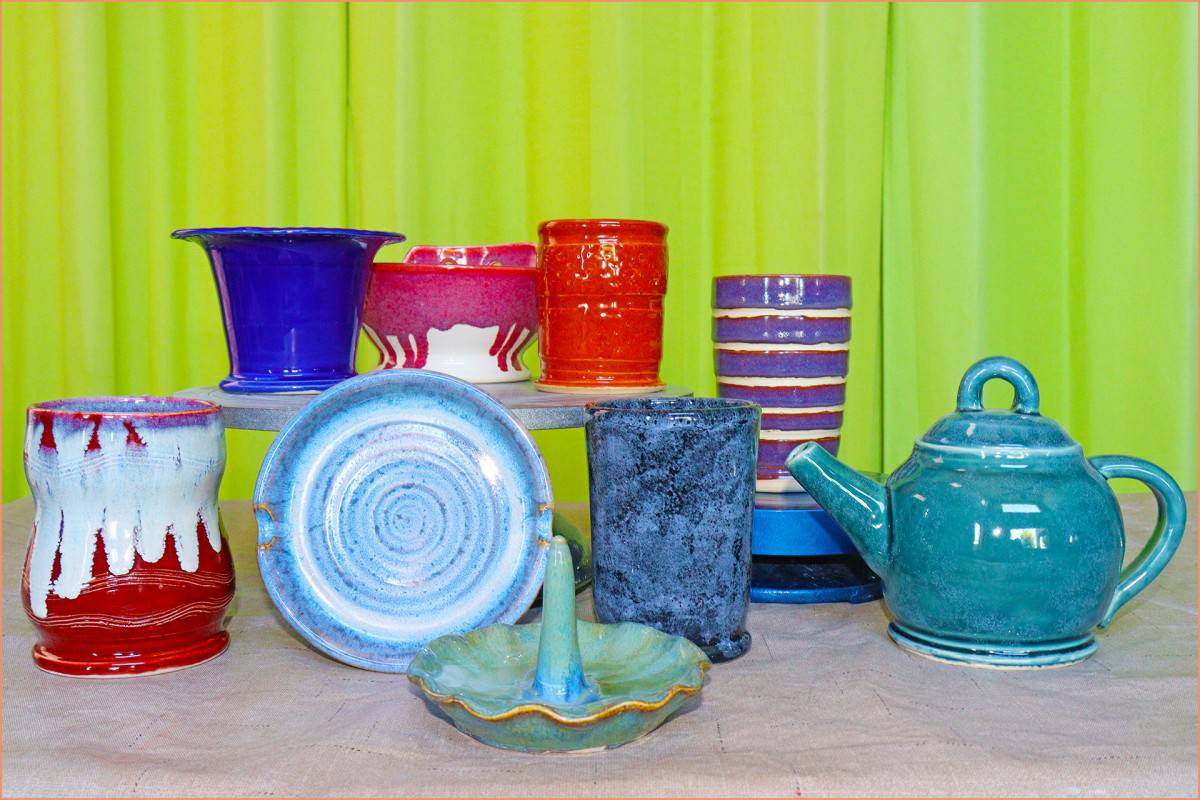 Glazing is a means to add colors to your pottery. It adds a touch of finesse to pottery pieces, giving them vibrant colors, eye-catching textures, and a smooth finish. Another fun part of the pottery-making process and there are many ways to apply glazes, some… 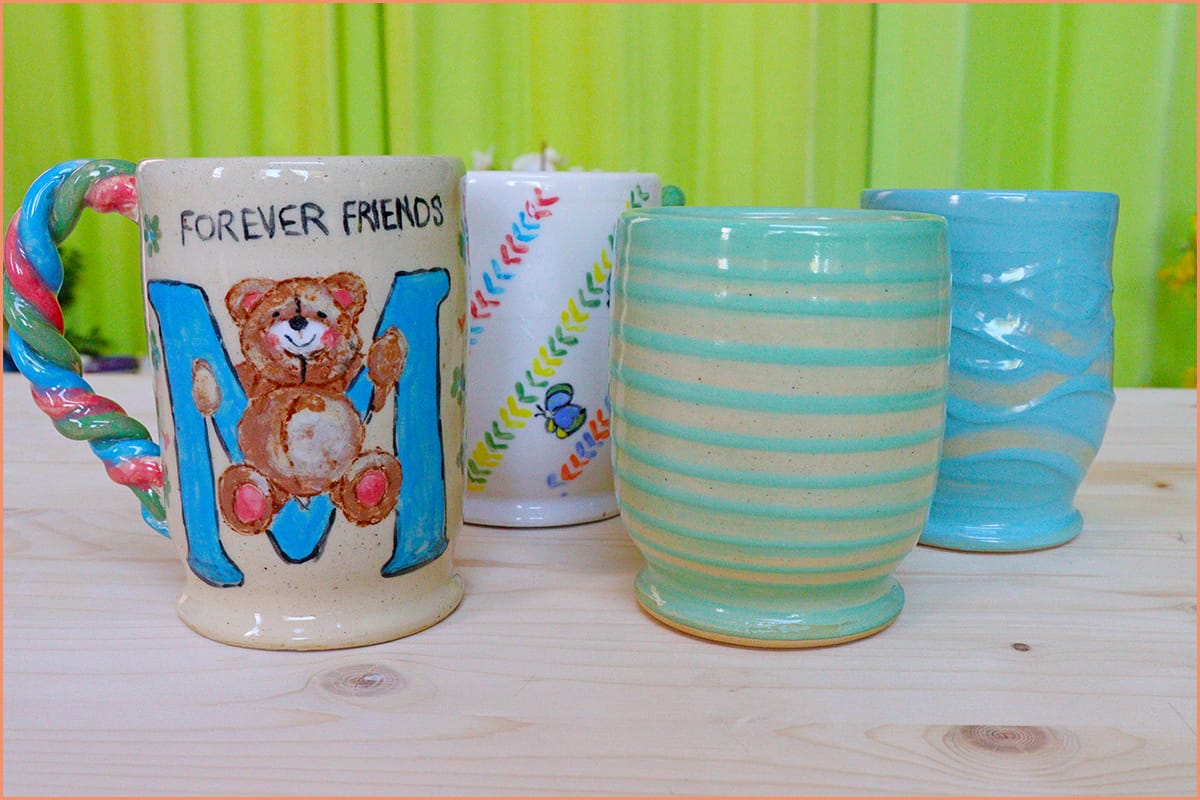 Pottery is a popular hobby, and because of that, Potters have developed a number of materials and mediums to decorate clay pieces. Among these, colored slips and underglazes are quite common. At first look, both these materials can look pretty similar. But is colored Slip…